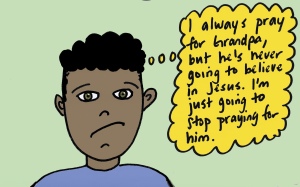 the whites of this character’s eyes will have to come from the paper. I will probably need to remove the background color too so the ink doesn’t get too expensive when printing.

You’d think that if you wanted to illustrate your own book, you could just draw and color your pictures and then send them off to be laid out in a book with no issues, right?

Venturing into the world of book publishing I am learning about all sorts of technical considerations when putting a book together. The big one that is affecting me is this issue with CYMK color. Apparently this is the color mode that books are printed in and when we color in Photoshop, it is not the default. So all of it needs to be switched over to this other code, which is not as vibrant and it’s range is more limiting. For example, it does not even include white. So now I have to go back through all of my illustrations and remove the white color from it, instead making it no color and then request that it be printed on white paper so that the white paper will show through the areas where no color was placed and have that be the white instead.

The second issue is not considering how I want it laid out before I drew the pictures. I drew my cover photo in a portrait position before I determined later that I thought my book would look best if it were printed in landscape. I’m now going to have to keep it in portrait because my illustrations just don’t work well with those layout types.

Then there is the gamble when finding a designer. I want to eventually learn how to use InDesign and the other software out there that I can use to create the e-books, but I just don’t have the time. So I’m taking some advice I got in a Linkedin group for children’s books writers to pay someone to layout my first book and then use that layout as a template for my other books as I learn the details of the software. Not a bad idea.

But how much should I pay? I don’t have funds yet for my books. My books are my attempt at teaching and reaching children and their parents, but with the hopes of it generating some income so I don’t have to leave my own kids to be taught by others while I run off and teach someone else’s kids. The irony makes me sick when I think of it. The prices out there range from as little as $150 if I go over seas, to as much as $5k if I choose a really good professional here in the states. But the average seems to be about $1500 here in the states. I’m going to try the person I found overseas and hope that I am happy with the results and that my test run on Amazon proves others like it too. If not, I may have to start taking some courses and become a professional book designer myself just to avoid having to pay those ridiculous costs for my future books.

For anyone interested, I am going to release my first book as a free e-book. I would love to share it with many people and get many people to try it out on their kindles and with their kids and on their ipads (is that possible when downloading from Amazon? I’ll have to look into that one too) and hopefully give me positive feedback, but any feedback is good so I can use it to revise and put out a better 2nd edition that I will then have in print as well. I don’t know about you, but I don’t do the e-book thing with my kids. We still like good old fashioned flip through the pages books. And if we are like that, I can’t help but wonder if most parents are still like that with their kids. In effect, I think it is essential that my book be sold in print form.k (UPDATE: HOW TO LOVE LIKE JESUS: A GUIDE FOR CHILDREN AND THEIR PARENTS IS NOW AVAILABLE HERE.)

3 thoughts on “Illustrations and Layout Issues in Children’s books”