Jameson Jeffrey Hemsath left the safety of his mothers womb to live in a world marred with imperfection and we couldn’t be any happier. He came out perfectly aware of what he got himself into as he indicated by his voracious cry. With a head full of hair, long, slender fingers and toes, bluish eyes, and a pink body, Jameson came crashing into the world with the help of a C- section. Theresas body just did not respond as we had hoped and she never began labor, never dilated, never had contractions. After 41 weeks, the doctor scheduled the procedure for today at 8:30 am and we arrived at 6:30 am. Theresa was instructed not to eat past 10pm of the night prior and no water beyond midnight. Needless to say we arrived at the hospital tired, anxious, hungry, and dehydrated. Well, Theresa did. I had a large cup of coffee while the remnants of an off-brand rice crispy cereal dried on my shirt.

Anywho- we began the process almost immediately. The doctors have a three room system: a prep room, an operating room, and a recovery room. In the prep room we watched TV as I filmed the current events so Jameson can look back on them. We made jokes and goofed off with the nurses. Im not sure they appreciated it so much. At one point, they had Theresa attached to all sorts of tubes and then asked us: 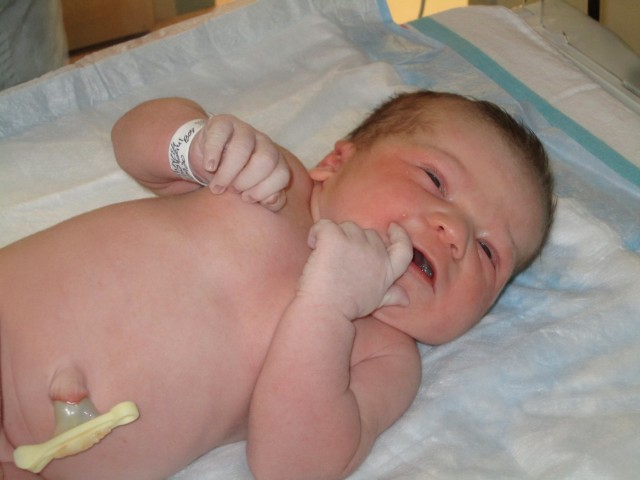 I made a few jokes and the nurse didn’t respond much to me after that. Everyone’s a comedian. Linda and Barb arrived and we all spent some time together before the scrubs walked in to take us out. Our OB looked at me humorlessly and said, “where’s your scrubs?” I took that as my cue so sneaking off to the bathroom I put on the Jenny Craig after-picture sized paper clothes. I felt like JD in a fat suit (SCRUBS joke). The hair net, however, takes the cake. I really felt comfortable in it. I may just buy a few for casual wear. Now, I look just like the rest of them while Theresa sat in the bed talking with the anesthesiologist and I had flashbacks of that episode of Twilight Zone where the pretty girl had the operation to look like a pig person (the episode is called “Beauty Is In The Eye Of The Beholder”). They led us to the next room.

In room two they split us apart. Theresa went in to the operation room to get the epidural and the doctors began to prep their tools for operation. I sat and waited… and waited… and waited. Two minutes later, I realized my impatience. The total wait time ended up being around 20 minutes before they called me in. I walked into a room and a blinding light met my eyes. Just like the movies! The pristine room held machines, tools, tech, and beeping things and I couldn’t help but recall the brainwash scene in The Manchurian Candidate. They led me to my wife whose wandering eyes illustrated her drugged induced state. She was seriously loopy. I immediately sat beside her and began to stroke her hair. She loves when I do that. I confessed my love for her and shared my absolute joy over our child. I held back the tears as my fears of birth defects and abnormalities came racing back (thank you… Satan!). Oh how I desire a healthy child!!  I beat back the thoughts and moved in to kiss my wife. Well, my face mask touched her face mask… ahhhh, the medical industry.

I moved my camera above the paper curtain before the doctors told me not to. I sat down. After all, I wouldn’t want someone to film me in the event of a massive screw up. They told me the light may bother the baby’s eyes. I didn’t argue. Nor did my camera have a light. I sat and sang a made-up song to my wife and she told me they were close. She began to breath heavier and the doctors told me to look! look! look!

I rose above the curtain with my camera to see a pink and purple little human stretching and clawing and crying. He looked perfect and I couldn’t have been more proud. Although tiny and little, he fought against his aggressors and looked for his mamma. He wanted milk but the police state wanted him marked. They inked his foot and poked and prodded at him, he cried and cried and cried.

I had to draw the line.

So I leaned in close and whispered to him the way I would at nighttime when I saw him moving in mamma’s belly. “Your daddy is here. Your daddy is here. It’s okay.”  Immediately after I spoke to him- IMMEDIATELY- he stopped crying. The boy knows his daddy. A calm came over him and he almost looked up at me (almost because his eyes remained closed). I stood amazed at the power of heredity until the nurse gently whispered to me- “we need him to cry so he can clean out his lungs.”

I followed him around with a camera until they brought him to mamma. I put him next to her face and she began to whisper to him- “I love you so much, I will never leave you, I will always protect you, you have nothing to worry about, nothing to fear…” She whispered and he listened. I can think of no better example of the bond that exists between a mother and her child. It’s something that exists between them- it’s palpable but it’s not material. It’s not in the genes and it’s not in the cells. If it were it could be destroyed, it could mutate. It would disappear when the baby left the room but it does not. The bond remains even when the baby is taken to the nursery. It exists in the realm of thought, of beauty; the immaterial and the transcendent. To think there are some who would deny this is silly. That position has never been more ridiculous then when watching a mother and her newborn.

This perfectly designed human is mine. A million and two different parts. 30 billion cells and even more proteins, amino acids, and polypeptides- and that’s just his body. So many different parts arranged in the right way at the right time. A complexity so rich it’s irreducible. At so many different phases any one part or particle in billions that malfunctioned in anyway could have ended the child entirely. From conception, to gestation, to incubation. This was no accident. No result of natural forces. He is beautiful but that beauty does not exist in his genes. It’s not in his skin cells or his hair. If it were it could be taken from him with a bruised knee or hair cut. No. The beauty that exists in him is a part of him but separate from his physical features. Darwin didn’t just have the science wrong, he had the philosophy wrong too. How ironic that in the aftermath of death of his daughter, Darwin abandoned his wits and adopted anti-theism.

The third room is where we rested until the doctors “allowed” us to see our child (yes, you read that right). I picked up Kanan who spent some time with us before going back to his dads. Family came by and a few friends. We are so grateful for them. Things have since calmed down and we are enjoying some down time. Jameson is sucking his fingers now and looking at me through the plastic tub in which he rests. His eyes open and close depending on the speed of my typing or the volume of my voice. He flinches in panic from time to time as he remembers that he is not in the w

omb any more. Little known to him he has entered a fallen world, a disgusting world of greed and envy, pain and suffering. Though we will try to protect him we will not always be able. Like Neo, he will awake to start his training; fighting evil and those who love it. He is sleeping now…almost. And it’s a good thing too.

Tomorrow is gonna be a hell of a day.