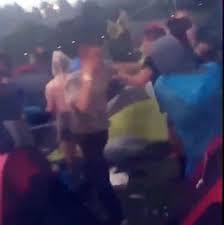 In my 11th grade American Literature class, my students and I started talking about this cycle of cruelty among the characters in the novella, particularly the villain and his wife. From our analysis of Of Mice and Men, we decided Steinbeck argued that cruelty can be a reaction to fear or loneliness. We shared some of our won experiences where we had seen others act cruelly to others due to fear or loneliness and even looked at our own actions. I couldn’t help but remember a high school acquaintance whose name I will change to David who was cruel to another kid and wondered about all the possible causes for his rage. I’m still haunted by my own cruelty for not doing anything to stop what I had seen or help. We all spent about 30 minutes writing about an experience. I shared my story later with them during our readings:

It was an unusually hot day in May my junior year in high school after a late Spring storm’s winds and thunder had electrified the valley before rampaging on to the East. David was going to fight another guy that day. Big, tough David with reddish hair and tattoos who worked out and drank beer and got drunk and liked to fight.

Who the other guy was I did not know. But the rumor hummed around that they were meeting at Beryl Park after school. And that is all I or the other teens at Alta Loma High School needed to know.

We all piled into our friends cars and blared out Rage Against the Machine and Nine Inch Nails from our radio speakers, pumped for the entertainment of plows and punches, laughing and shouting excitedly for the coming show: thirsty.

We all sat on our tailgates in the parking lot. A collection of used Jeeps and Bugs, lifted F-150’s and Tacomas, and shiny new Ford Mustangs lined with teens in Doc Martins and baggy jeans–white kids with too much time, waiting for the guy to show up whom David was going to fight.

But the guy didn’t show.
And David was ready to fight.
Fight him.
Fight someone.
Fight anyone.

He needed to release that angry beast raging inside of him. Angry at who or what, I don’t know. His father perhaps–a lion of his own past who called him stupid or weak? A mother who left him for her drugs two days before his 5th birthday? Maybe a child-molesting uncle? Or a long-legged girl who broke his heart his sophomore year?

We thought it was time to go, disappointed, heads shaking and downcast, eyes parched for the sight of blood, ears for the thud of punches and the fumbling of legs over shoulders and backs. Maybe because the violence could somehow make us feel alive.

But just as we started to pack up to leave, David started to roar; roar like a hungry lion. Colors poured out of him—black and red and purple, pouring from his mouth and his pores and his eyes.

We all turned and saw and knew. Something crazy was going to happen. The hairs on the back of my neck and arms delightfully sprang up in response.

And so he charged at some random guy there. Some guy just like me or him or her—smoking a cigarette and wearing a wife-beater and unlaced Vans. He sat there just like the others–there to watch. The guy had no idea he would be the one David would fight as we all watched with mouths agape. And he did not have time to prepare, as he laid on the hood of his car, lighting another cigarette with the burning tip of the first, only to look up to hear the noise of David’s roar and see him charging after him.

David beat the $#!% out of that kid. Beat him to a bloody pulp—missing teeth, a gash across his brow, eyes swollen immediately. He left that boy unconscious on the hot, black asphalt that day in May of 1996.

And everyone backed away, disturbed by the width and depth and height of David’s anger, not wanting to be next; and recognizing the severity of what just happened, they felt that surge of fear of cops and sirens, and quickly hopped into their cars, squealing away.

I stood there watching the kid moan on the rough parking lot asphalt, stagger up and stumble back down with eyes of confusion—no doubt wondering what happened.

He didn’t answer–just laid there and wiped the blood from his lip, eyes wet with tears, and looked around, studying at us through murky orbs, as if he were trying to decide if he was really seeing us.

And then I just walked home with my friends: a cruel act of silence. I left him isolated and abandoned because I was afraid of what I saw. And perhaps because I was afraid of that evil part of me in the layers of my kind shell that liked the entertainment. I wanted to push his bloody image away from me at any expense. Not realizing that the image of him left alone in that park would haunt me the rest of my life.

I wonder if this experience hardened him. Made him angry and cruel. Just like David.