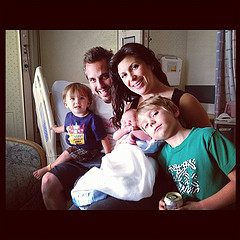 I can’t believe it has been 7 months and I still have not written about my experience giving birth to Benjamin. All the little details and fresh emotion from the experience is gone now—but I will zero in on some key moments.

I went into the operating room for my third c-section rather fearful. I barely remember my first c-section—because it was an emergency and I was in so much pain from labor and my uterine infection that it was all really a blur. With Jameson, my second c-section, the epidural they gave me before the surgery spread so strongly that I had a hard time breathing and felt a lot of stress and weight on my chest. It was a bit scary. But then I got through it with some oxygen and I was pretty high….the video Owen took of me shows my flicking my tongue and talking so quietly and jumbled that I was not even understandable. So with the third c-section, I was fearful of two things—one, would be that the epidural would make it difficult to breathe and weigh on my chest again. And second—that a crazy complication would happen and I’d bleed to death on the table. Yep….I thought that this could very well be the way God was going to take me out of this world.

They gave me a spinal block instead of an epidural this third time, but just like the epidural, it worked too strongly and sure enough, the weight spread across my chest and made it difficult for me to breathe. The oxygen mask helped as I told the anesthesiologist about my prior experience so he knew what to expect. I writhed and moaned and he gave me the mask. After what seemed like a few terribly uncomfortable minutes, the effects subsided and I could breathe again.

The pressure and movement then came from down below  and I heard the doctors talk excitedly about the baby they were pulling out.  But Benjamin didn’t really cry. And I heard voices of concern. They brought him to Owen and me without tears and then took him to be cleaned up and monitored to see if anything was wrong.

During the hour in post-op, I knew they were going to send him to NICU. Just like they took Kanan, my first to NICU. And I was right. The doctor came in and gave us the news.

Benjamin’s blood sugar was a bit low. That was their first concern. The second concern was Benjamin’s lack of tears and lethargy. They figured it might be due to the sugar. So they said they wanted to get him into NICU until his blood sugar got back to normal.

It did. But they didn’t let him out. They hooked him up to IV’s.

Then their concern was that he was not eating enough. When he did, they would take him off of IV’s and look to releasing him. He did. They took him off the IV’s but didn’t release him.

Their next concern was to get him to eat even more. Eat more than even a perfectly healthy baby downstairs would eat. And until then, they refused to release him.

I was pissed. But what was my alternative? Take my baby against the doctor’s orders?

On the second morning, I called to see if I could come up and nurse the baby. The nurse on the phone said yes. So I went upstairs to nurse him but the nurse who answered wouldn’t let me in because they were in transition of shifts. I shared my frustration, calmly but firmly—saying that I wish they had told me this over the phone or else I would not have walked all the way over there. Next thing I knew, the nurse was telling me to calm down and that no matter what I felt, I couldn’t take my baby that morning. Now I was really pissed. Calm down? I was calm. Now I was not. Take my baby? I just wanted to nurse him. I knew I couldn’t take him right then. They’d made that clear. Then the worst happened—the nurse attempted to hug me and tell me that she knew I was frustrated and what could she do to make me happy. Uh, how about you don’t touch me? Then she grabbed her manager. The manager then came out and told me that I couldn’t take my baby home right then and I needed to calm down. Now I’m yelling. I’m not here to take my friggen baby! I just came up to feed him! What the heck! I seriously had to put my hands up in the air and back away in calm surrender after this explosion because I recognized it was heading in a bad direction. Just leave me alone ladies. I’ll walk back to my room and will come back later.

That was the most frustrating and looking back, funniest experience I ever had with NICU.

Baby Benjamin finally came downstairs to stay with me after noon on the second or third day. I don’t remember now. We had one night together before going home the following day. His cheeks were so chubby, they sagged! And they were scratched up from his nails. He was precious. I was so happy to have him with me. And I’m so happy God chose to give him to us.

Here are some good reads on c-sections, NICU experiences, and raising boys