Owen and I celebrated our 2 year Anniversary on October 1st. About a month prior to that day, I came up with a great idea for our special day: wine tasting in Temecula and spending the night at a nice hotel. Owen was in. So I set to work, finding a great plan for our special day.

That morning we dropped Jameson off at a friend’s house to be watched for 24 hours, dropped off Kanan at his dads and then headed out to Temecula. I couldn’t open my email on my way to get the address to the hotel I had booked, but I knew it was off of Winchester. I was pretty certain it was The Holiday Inn so when we discovered a Holiday Inn near Winchester, we pulled right it. We tried checking in but the front desk said we needed to do it when we returned from our wine tasting trip (which was scheduled to pick up at the hotel around 10 AM. So Owen and I headed over to back room where the hotel was giving its complimentary breakfast. About 10 minutes into a delicious omelette with toast and jelly, and a hot coffee, my email finally worked. I opened it up to make sure the pickup time was correct, but instead I was greeted with shocking news. We were at the wrong hotel! We were scheduled to stay at another hotel down the street! Owen and I looked around embarrassed realizing we were eating stolen food and quickly snuck out of the hotel and raced to our car in hopes to make it to the hotel we were scheduled to be picked up. 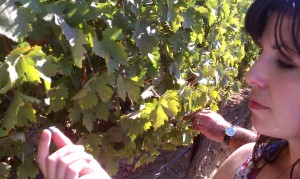 Soon enough the Grape Vine Express arrived and took us on our trip. We toured four different wineries that day. Our favorite was the Leoness, where we got to walk through the vineyards and taste the grapes right on the vine. It was a beautiful winery resting on hills overlooking wine country. Toward the end of the tour we got to sit in a dimly lit room where the barrels of wine were stored. Would have been a beautiful and creative room to hold a wedding reception in. The rest of the wineries were rather crowded and did not include tours. Still, they were fun and Owen and I enjoyed talking with each other and meeting people, and of course, tasting the different wines.

We came back to our hotel and rested for a couple of hours and then headed out to Old Town Temecula for our anniversary dinner. We found this great mediterranean restaurant there called Soros. Owen was a bit skeptical at first of the restaurant, in fear that mediterranean food would be mostly vegetables. I assured him he would be able to eat meat. We enjoyed the warm October night on the patio of the restaurant, the tables illuminated with tiny white christmas lights and the moon. Live music floated through the dinner area from a beer-garden near by. I had a delicious beef shish-kabob and Owen enjoyed a chicken artichoke dish. 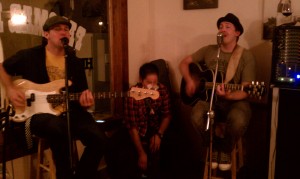 We finished the evening by walking around old town and finding this tiny little wine tasting room at the bottom of an old hotel. There were three men there around our age playing cover songs of 80’s and 90’s music with their own reggae twist. A man renting the tasting area poured us a zippy and dry Zinfindale from his own vineyard and Owen and I laughed and sang a long with the band to old Sublime, Violent Femmes, and Chris Issac songs. We would have stayed longer if these two blonde cougars with their rich, old boyfriends hadn’t started to annoy us with their provocative dancing and squeeling. So we headed back to the hotel to enjoy the rest of the evening, just the two of us.

The next morning, we ate the less quality but still delicious breakfast that we were supposed to eat, given we were now in the right hotel. And then raced back to North County San Diego to pick up our little Jameson who we missed so much.

All in all, our Anniversary filled us with many fun memories.