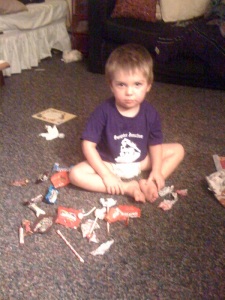 This is a reenactment of what I discovered. Imagine this with chocolate all over his face and his hand in the candy bag.

Tonight, after an hour-long good night conversation with my husband Owen on the phone, I hung up the phone and attempted to get some last-minute, late night work in before I went to bed. It was approaching 10 o’clock. But then I heard a little child’s voice in my bedroom and realized Kanan was awake. I peeked into the room, expecting to see my sweet little son in his bed with his legs in the air and a car in his hand or something. But no. Instead I found my son, face covered in chocolate, sitting in the center of the floor amongst a pile of empty Halloween candy wrappers, lolly pop sticks sticky and bald, with his hand in his Halloween bag reaching for more. My mouth dropped open. He just sat there staring at me. Then I said, “Kanan, what did you do?” and he ran into his bed embarrassed and started to cry.

I cleaned him up. Brushed his teeth again. And explained to him that he can never do that again. That he must ask me before he can eat candy. And that he can get sick by eating that much. He said okay. It was adorable. 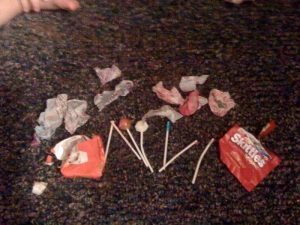 I discovered two more bald lolly pop sticks after I took this photo and threw out the candy.

I cleaned up all the candy wrappers and took the pictures for record. After the last photo, I did find two more bald lolly pop sticks. So all together he ate 7 lolly pops, half of two other lolly pops, a bag of Skittles, and one Reeses Peanut Butter cup. He was up for that entire hour I was talking with Owen, eating all of that candy. our

I learned a valuable lesson today. Never ever ever leave the Halloween candy bag on your dresser in the bedroom. Your two-year-old will find it. And he will eat ALL of it.

One thought on “Caught!”