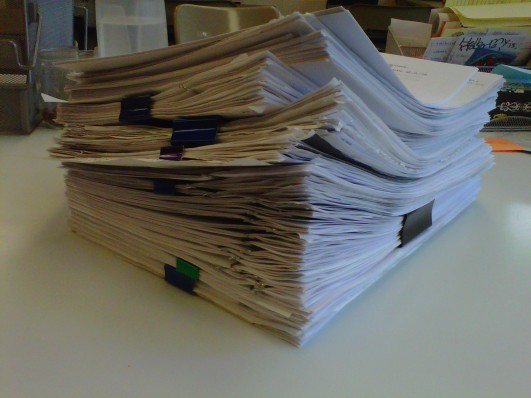 I’ve got a stack of ninth grade English class essays in front of me that I just started reading. I’m down to the last five and am learning so much about my students. It’s perfect that we plan for this essay the first six weeks because for the kids who actually do the essay (an autobiographical narrative), it does teach me much about why they are the way they are.

But this year, I am especially sad by what I am reading. Sure, the bad grammar and elementary vocabulary is depressing, but more importantly, it’s the stories. I asked my students to write about a time in their life that was monumental or that signified a turning point for them, a moment which in some ways defined who they were or why they were who they were. This year, I’ve read some stories that make my heart break. Stories of drug addicted mothers, foster care, abusive fathers, and gang deaths. Stories of abandonment and a desperate need for love.

Sometimes I think I will have to read these essays over and over again when I want to get mad at my students for not being what I think they should be. Yes, they should try hard. Yes, they should keep getting back up when they fall and reach their goals. But lets face it, where are they going to learn that from? The home is the most important environment these kids have and most of them are broken. In the town I teach in, divorce is common; drug use, gang violence, poverty, alcoholism, child abuse, sexual activity, and illiteracy is a norm. And then to make that worse, they have all the radio stations and the movies teaching them that indulging in sex, drugs, violence, and greed for money is a normal and expected way to live and will fill their life with joy.

Meanwhile we have politicians, judges, and other American citizens pointing their fingers at the education system and screaming out that we are the ones who failed their children. Now I am not saying that our education system doesn’t need work. Believe me, this NCLB bologna is ridiculous and only leaving more kids behind but we could be amazing at what we do, and I still feel we’d have a problem. Why? Because how can I expect a 14-year-old teenager to pass his classes and his state exams at proficiency level when he lives in a home with 10 other people including his drunk father and his mother who works three jobs to support him and his best friend just died in a gang shooting, and he himself is being pressured by all the violence in his neighborhood to join a gang too so he can have protection and he can’t read very well because no one read to him when he was a child and meanwhile he wants money because all the music he listens to and movies he watches and commercials he zones in on tell him that money will give him everything he wants and right now school doesn’t seem like its going to work out for him, but selling drugs could give him some instant cash so…….

Do you understand what I am saying? No, not all of my kids are gang members, but many of them come from everything just short of that. I’ve got a 14 year old girl who is pregnant, another student who is living alone in a 1 bedroom room he rents while working 2 jobs and going to high school so he can live the American dream. I’ve got another student who is so proud right now because his mom has been clean from meth for 10 months and he thinks she finally kicked the habit so they can be a family again.

This is what our society has left for our grandchildren. I wasn’t here 50 years ago, but from what my parents tell me and my grandparents, this wasn’t the norm then. This wasn’t the problem with education then. So what is different?

I think greed and an overall indulging and condoning of immorality has corrupted this world in a way it hasn’t seen since Sodom and Gomorrah or the times of Noah.

So now what to do?

So many of my student’s writing is so poor despite my scaffolding, I will have to give them a D or an F on their essay, but what I really want to do is give them a big hug and tell them that despite what has happened to them, they are actually doing really well. And I will for many of them. I’ll give them their grade because I can’t fuel the system by just pushing these kids a long, but I will love them the whole time I set the standard high. And I will encourage and support them as they try to learn (or not) the skills I am instructed to teach them.

What else can I do?

It’s not just the education system that needs to be changed people. It is everything. Its turning off that song on the radio that glamorizes sex and drugs no matter how much we just like the beat because if we all did, the radio station would stop playing it and that would be that many fewer kids being indoctrinated to believe that way of life is normal and good. It’s about going to marriage counseling and being true to our vows to our husbands or wives even if we aren’t in love anymore because that is what marriage is about and that is what our kids need. It’s about teaching our kids to find joy in giving rather than just taking. It’s about going to the library if we can’t afford to buy books and checking out one bedtime book to read to our kids even if we really want to watch that lame reality TV show instead. It’s about teaching our kids that they can have some self-control and not have sex even if the world tells them they should. It’s about sacrificing our own selfish desires for the better of others. Can we do this? Honestly, I know of only one way we can all transform…..and you all know my stance on that. But it is a condition of the heart. And that condition is something I don’t think will change for better anytime soon.

So in the meantime, I will continue to love these kids. And hope and pray that we all survive the future that they will bring on this world when they become our next voters and leaders of this country.

One thought on “Teenagers These Days: rantings of a scribbling woman”