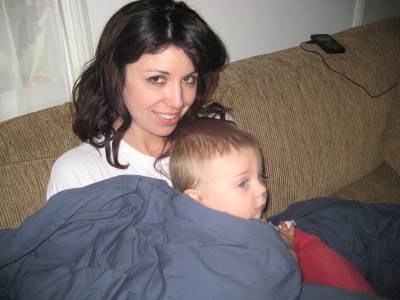 This always happens. Mike leaves on a trip, in this case Costa Rica, and the drama goes up. Kanan has been through some adventures this week. Last Friday, when I took Kanan into the doctor’s for his antibiotic-caused-thrush, I also pointed out that his left pointy finger looked red and swollen. She couldn’t figure out what the cause was, nor could I. She told me to keep an eye on it and if it looked worse to bring him back in. Well by Monday, the red mark looked darker, but Mike and I weren’t sure if it was darker because it was healing or if was getting worse. Still, Mike was super busy with getting ready to leave for Costa and I was super busy with work and night classes and coaching that I put it off because Kanan didn’t seem bothered by it. Well today, blisters formed on it. One week later? Does that make sense? By the time I saw this, it was too late to take Kanan to his pediatrician so I called my Doctor who runs an urgent care. When I described Kanan’s finger and the history behind it, he strongly suggested taking him to the emergency room as soon as possible. And so we did. My sister, Kanan, and I were eating IHOP pancakes when we were advised and we packed up and left for the emergency room. They can’t figure out what caused these symptoms. They think he burned his finger badly and that it developed a yeast infection on it from the antibiotic usage and the thrush. The blisters are dry so it is just the skin starting to pucker and fall off.

And last night, before my sister came over to babysit Kanan, so I could run off to a competition with my JV Academic League team, I was making dinner and turned my back on him for 20 seconds and then heard a cry and a crash—Kanan had climbed out of his pack-n-play and fell onto the kitchen floor hard–landing on his back and hitting his head. Luckily the floors are soft and he was fine after a few minutes of crying and then tasting some pasta.

Thank God, Mike’s mother is down as of tomorrow to help me out while Mike is away. I’m afraid of what other adventures Kanan would put me through otherwise.

On the positive note, Kanan was a hit in the emergency room. The crowd loved him. He was charming and adorable as he danced and pushed his stroller around and waved bye-bye to doctors passing by. We actually had a decent time and they pushed us through the fast lane so we were in and out in an hour and a half. Cost me 100 bucks though! Ah, the price for peace of mind.

One thought on “Murphey’s Law–when Mike leaves on vacation, all hell breaks loose.”