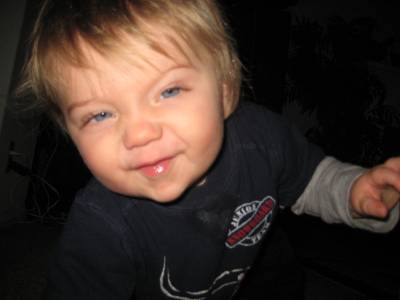 Kanan is officially 10 months on the 11th. I can’t believe I have to start thinking about planning his first birthday here soon! Well here are his stats:

Personality: Kanan loves life and even has a sense of humor. He is very vocal and is actually starting to get really loud and talkative when he is happy. He is even louder and yells when he is upset or doesn’t get his way. Mike and I are working on trying to nip that in the bud, but at the same time, if he can’t express his feelings with language, what else can we expect?

Mobility: crawling better than I can….can get from one side of the house to the other in less than a minute. Can stand on his own without support for a few seconds up to a couple of minutes depending on the moment. Cruising lightly. Can wiggle his bottom and bop up and down when he likes the music playing.

Other physical skills: Can clap and hold his hands up so I can slap them in a mutual patty cake as well as high 5’s. He bang on his drums with drumsticks and has recently discovered gravity so his most recent favorite endeavor is droping everything on the floor.

Language:  He is babeling soo much and his phonemes sound like real bits of words. He can say Dada and Mama but he says Dada more. A couple of times he has actually said a word, but I’m not sure if it was just coincedence. He said “ditar” when he saw his guitar once. And he said “dud” once when he looked ate the dog. hmmmmm

Eating/Drinking: Kanan is eating so much now. He eats a lot of table food now and is practicing drinking his formula from a sippy cup with his breakfast and lunch.

Sleep: Kanan has eliminated his morning nap while he is at daycare. So Monday through Friday he takes a 1.5-2 hour nap a day and then crashes out around 7 and doesn’t make a peep until 7 the next morning. When I’m home, he naps twice still. I think he gets so excited when he is around his friends at daycare. He just doesn’t want to go to sleep.

As always Mike and I LOVE being parents. It is by far the best experience in the world. My favorite activity is spending time with my little family. Check out this last month’s pics HERE!

UPDATE AS OF JANUARY 12 (two days after this was posted)—Kanan just cut his second tooth this morning. 🙂