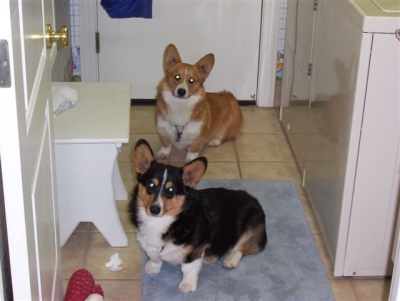 As some of you may know, our little family suffered from a tragic event last Monday. Some gang members in our neighborhood broke our fence and sent in 3 blue nose pitbulls, trained in dog fights,  to kill our two little Corgies, Smokey and Bandito.

I came home from work Monday afternoon to find our two boys being mauled by these three dogs. My instinct at first was to scream out for help of course, but also to try and stop them. When I ran toward them, one of the pitbulls charged after me, and it was then that I realized I couldn’t risk my life for these dogs. How I wished I had a gun, but I didn’t. So instead I just screamed as loud as I could for someone to help them and cried hysterically as I watched the pitbulls continue to maul the boys. They were not dogs, but a pack of wolves. Thank god my neighbors ran into my backyard and began to hit the pitbulls with sticks. In the meantime, I somehow managed to answer a phone call from Mike as the phone was in my hand and screamed for him to get home to help. My neighbor’s son called the police.

There was so much blood it looked like a murder scene. Smokey was able to get away first while my neighbors hit the dogs and he ran into the house and out the front door toward the car in desperation, leaving a river of blood as a trail. The blood poured out of his left hind leg like a faucet and I was certain he would die. One neighbor helped me throw Smokey into the car and wrap him towels. We then found Bandito, who finally got away. He was hiding behind some bushes in my front yard. We threw him in the car too and my other neighbor jumped in my car so we could take them to the hospital. Mike arrived at this time, just in time to watch another neighbor jump into our backyard and drag away two of the pitbulls and take them 3 houses down. One of my students heard my screams and ran into my yard, grabbing the third pitbull. He apologized to me and said he would tell the owners.

While our two dogs were being operated on at the hospital, we had 5-7 police officers on our property taking our statements and interviewing neighbors. They took pictures of the scene and told us we could prosecute. Unfortunately, however, after their investigation and interviews with neighbors, they could not gather enough evidence to pinpoint exactly who broke into our yard to let the dogs in. Neighbors heard people do it, heard them chant for the dogs to “kill them” and heard one of them scream to the others to get the dogs out when our neighbor Rosa yelled that she was calling the police. Unfortunately, only one pitbull was found and detained. The one my student dragged out. The other two, that were dragged out by a man Mike has not been able to identify yet are missing. Of course, the neighbor three doors down says there were no dogs there nor that he had anything to do with this. One of my students said she heard from another student on campus that the dogs were sold by the owners. Until neighbors give up the information as to who exactly broke our fence and let these killing machines in, we will not be able to do anything. Because the only ones who can be punished are the gang members who let them in.  The pitbulls can be detained, but cannot be euthenized because they did not hurt a human. Apparently charging after me wasn’t enough.

We have spent $5,000 so far on the two dogs. The majority of the money going toward saving Smokey who was going to die if we didn’t pay for a specific surgery that would identify the source of his internal bleeding. Smokey suffered from multiple bite wounds of course and those are stapeled and stiched, but additionally his major artery in his leg was severed as well as a major vein. That vein was the source of his internal bleeding and doctor’s said it was a miracle they were able to find that vein. He has also had one blood transfusion and will probably need another one soon because his blood count is continuing to drop at this point, which could signify his body is giving up. Additionally, if his leg doesn’t figure out how to recirculate the blood because of the damaged artery, he will have to have his leg amputated. We will find out more on Saturday. He is on a lot of medication and half of his body is shaved. All we can do now is wait.

Bandito is badly hurt but will live. He has multiple bite wounds all over his body. The pitbulls also tore out his anus. His worst bite wound is on his belly. It is about 3 inches deep and 4 inches long. He has staples and stiches in many places. The wounds are so deep, he has tubes that look like bones sticking out of them in 3 different places which are supposed to help drain the blood and pus that is collecting in them. Smokey also has these tubes in a few places.

Please keep our little family and of course, our boys in your thoughts and prayers. They mean a lot to our family and we will not be the same without them.

7 thoughts on “Please pray for Smokey and Bandito”