We are over and past the hump (or the slump)!! The most difficult time of infancy is over and gone—no more floppy head, or lots of crying, or a baby who only eats, sleeps, and defecates. We have a happy baby now. A baby who still eats, sleeps, and defecates, but also loves to laugh, squeel, babble, kick, stand, suck on his hands, put anything and everything into his mouth, go for walks in his stroller, go swimming, go to the beach and let the white water crash on his feet, go shopping with mommy while he tags along in his sling and gets the googlie eye from every man , woman, and child in the store. It is so much fun having the little guy around it’s ridiculous. Mike and I play fight over who gets to greet Kanan in his crib when he wakes up from his nap. When we go out to eat, we just eat and stare at Kanan or talk to him the whole time. Yeah, we are hooked! For more pics of this month please click HERE! Or just place your cursor over it and wait for a box to appear. Then wait a few more section and my pics will show up individually in the box and you can scroll through it that way without having to go to the website. 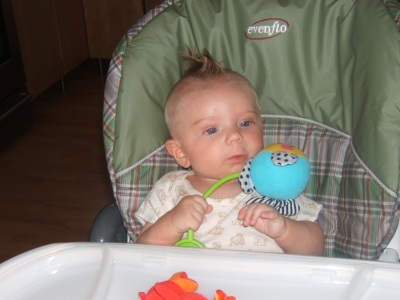 Eating-–While still breastfeeding, when he does take a bottle, he can drink up to 7 oz in one sitting now! He is now drinking formula before bedtime to help him sleep a little longer. It is working too! He has slept through the night once so far and that was a few days ago. He is getting easily distracted now during his day feeds, making eating take longer because I have to keep his interest long enough to take a full feed. A dark room helps if its immediately after he wakes.

He is also showing great interest in solid food. He watches us eat and opens his mouth like he wants to try it too. When his grandma showed him a piece of tomato on her finger from her marinara sauce, the little guy dived down and snatched it off her finger and swallowed it like he hadn’t eaten in a month! Sooooo…I’ve tried giving him rice cereal twice to see how things would go. The first time, he ate like a champ. He didn’t push it out with his tongue, seemed to enjoy it and ate like 4 teaspoons full. The second time, he didn’t seem to like it, was pushing it out with his tongue and barely got in 2 teaspoons full before I decided to put it away and try again in a week. Either way, he has a high chair now in which we use primarily for him to sit in the kitchen while I eat, or cook, or wash dishes.

Activity–Kanan is babbling now! And his first babble word is (drum roll please….) “MUM”! It’s adorable! Of course Mike is jealous. And of course I tell him that Kanan doesn’t know what it means. But of course, I am secretly thrilled! He is also starting to laugh. He started with me about a week ago when I was tickling him. He did it again this weekend when his favorite cousin Breanna was flirting with him. And he did it again when his grandpa Don was tickling him. And squeeling has been a consistent vocal practice of the little guy for a little over a month. He loves to kick. As a matter of a fact, we believe he will be running before he crawls, he loves to “stand” and kick so much. His favorite toys are his fish rattle and my wood bracelettes. His favorite book is “Snappy Little Dinasours.”

Physical Growth— Not sure of his exact weight yet, but I’m guessing close to 16 lbs. We will find out for sure when he gets his shots here in a few days. His neck is solid strong. Doesn’t wobble or flop at all. He can roll over from front to back and is very close to getting back to front. He is starting to grab his feet, which excites me because I love a baby that can suck on his toes. We also think he is teething—He has episodes of drooling, biting, poor appetite, pulling on ear, fussing—tylenol helps…hmmmmm

Sleep–He has slept through the night once!!! Otherwise he is down to waking up once in the night to eat. He does have nights still where he wakes up more than once though, but usually, a pacifier quites him. His naps consist of two long naps (1.5-2 hours) and one cat nap of 45 minutes.