Kanan is 3 months old today! It’s hard to believe that just three months ago I heard his first cry in the operating room after my cessarian section. A lot has happend this month. He started off the month getting his vaccinations and everything seemed to change after that. He went from sleeping until 3-530 in the morning before waking up to waking up atleast twice everynight starting at 130 in the morning. We think it was first a reaction to the vaccinations. Then the next week it was probably a growth spurt. And the week after that it was probably just habit from the two weeks prior. In the meantime, he was also getting really bad acid reflux to the point where we have recently started to medicate him with an infant dose of Zantac. He has been on Zantac for four days now. The first three days on Zantac he slept until atleast 4 in the morning. Last night, h

e woke up once at 230 am but stayed asleep after that. So far so good. But, I started eating dairy again after being off of it a week and the last two days Kanan has been a bit fussier in the day and very cranky around naptime. I’m getting off the dairy again tomorrow and will stay off for atleast two weeks to see if it makes a difference. Oh the price I must pay so that I can breastfeed my son. 🙂

He has still been growing and learning this month despite how tired he has left Mike and I. He is “talking” all the time and loves his newly discovered hands. Since he discovered his hands he is always analyzing them, playing with his fingers, sucking on them, grabbing my hair, holding toys, and pulling on his shirt. 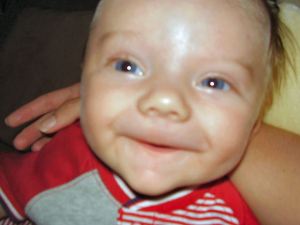 He is also outgrowing his hatred for car rides and is having more and more good days where he sits in his carseat quietly and sucks on his hands, looks at the dangling Zebra I hang from the handle, or out the window. Because he has gotten so observant and has strengthened his neck muscles as well, I decided to test him out in the big kid seat of his stroller instead of putting him in his carseat and he LOVES his walks now. We go everyday in the afternoon and Kanan looks around at everything while eagerly sucking on his hands or trying to eat his hooded sweatshirt while we stroll along. Today we went again during one of his fussy episodes and it was the only 15 minutes that he didn’t whine! 😛

Most days though, Kanan is in a good mood and smiles and coos all day long. He does have his fussy moments but nothing that is difficult to handle. Overall we have decided that he is a sensitive baby and in effect, is easily overstimulated by anything from a new toy to too much light coming through his window when its time to take a nap. So we do have to be careful about this or else his naps are affected. He has Mike’s intense desire to be on the move constantly and his ease at being distracted, and he has my love of color and conversation. As far as looks go, he has my bottom lip and my crooked toe. Thats it and thats all. The rest is Mike Mike Mike.

For links to more pics click HERE and for links to great videos including one of Kanan caught farting and pooping and others of him playing with his dad or of him picking up and trying to eat his rattle, click HERE.