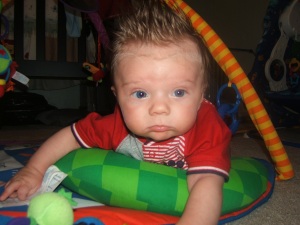 Since Kanan started losing his hair about two and half weeks ago, he has also started showing me more and more of his personality as his milestones are helping him communicate more. He has gained much more control of his hands lately and while I already discovered a month ago that he really loves his satin blanket (I call it his silky, Mike calls it his softy) Kanan most recently showed that not only does he like to cuddle with it when he falls asleep, he also likes to put it over his head, I’m assuming to block out the light, which he finds very distracting at nap time. About three days ago, Kanan made it clear that he did not want to be swaddled for his afternoon nap. I was having a hard time getting him to relax enough to fall asleep that I thought maybe his Silky would help. He cuddled with it, pulled it over his head and passed out. 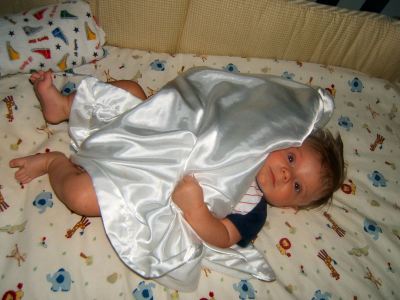 When I pulled it off his head in fear he would suffocate, he whined and pulled it back over his head. So I let him do it and just periodically peak into his crib and make sure he is getting enough air under the blanket by lifting an edge up and tucking it over the top of his crib bumper. His Grammy Joella and his father both wear sunglasses until dusk because they are so sensitive to the sunlight. Looks like Kanan got that gene as well. I’m going to get some black out curtains for his room I think, so the little balding boy can relax a little easier without creating fear in his Mama.

2 thoughts on “My Little Boy is Growing Up”