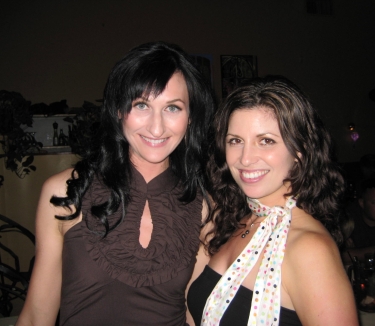 I remember when I was pregnant, people who were parents would tell me how much my life would change once I had a child. It seemed to be a bittersweet comment. They seemed to be moved by how much joy their child has brought them, but also seemed to warn me that I would never go out again. Well Kanan is almost 3 months old now and I officially went “out” for the first time since I found out I was pregnant. Coincidentally, my last time on the town was memorial weekend of last year and it happend again this year. I left Mike on Friday night with frozen breastmilk dethawing in the fridge and I kissed him and our son goodbye. My friend Kelley had her bachelorette party that night at Ole Madrid in downtown San Diego. We are posing in the first picture together at the restaurant.

To beat the traffic and allow myself to have a couple of first time drinks before I returned home, my friend Merideth and I took the train to San Diego and then took a trolley into town. It took us a while because we were so busy talking we missed our stop—twice! But when we got there we shared pictures with a flamboyant gay couple at the bar and then had a great girly time eating dinner with Kelley and her friends and raved over how great Kelley’s legs and hair looked that night. After dinner the gang left to go nightclubbing, but the last train left for home at midnight so Meredith and I skipped out on the dancing and went home. 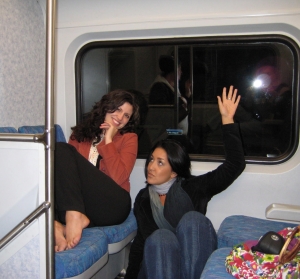 It was a fun home even though it took an hour because all the Padres fans riding the train were talkative and some were still tipsy from their beers making people watching quite fun. A guy sitting across from us took a picture of Meredith and I making a joke modeling picture.

I got home at about 1:15 am just in time to hear little Kanan cry out that he was awake–I wonder if he sensed I was home? He missed a feeding with his father because he had such a difficult time napping that when it was shortly time for him to eat, Mike didn’t want to have to wake him up again. It was suprisingly okay though because I really missed the little guy and wanted some contact with him before I went to bed. Its funny how this last couple of months, I’ve hinted to Mike about how I can’t wait for Kanan to take a bottle so I can go out once in a while. And then I go out and I can’t wait to get home to see him. I must have looked at his pictures in my phone like ten times and I called Mike so much he threatened not to answer it if I called again. 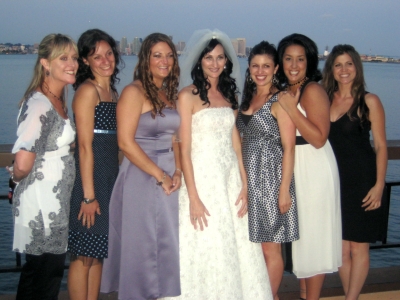 On Sunday, my sister and I went to Kelley’s sunset wedding at the harbor in San Diego and had a great time with my friends there. I did forget my breastpump so we had to leave just when the dancing was starting to get fun because the engorgement was rather painful. But this time, I made it home before Mike was in bed and in time for Kanan’s late night feeding—to smell his sweet skin and kiss him goodnight. I layed in bed quite content from being able to see my friends, but also very happy to be home and eager to see my family again the next morning. Ahhh, my little life. Isn’t it grand?

2 thoughts on “My Little Life”