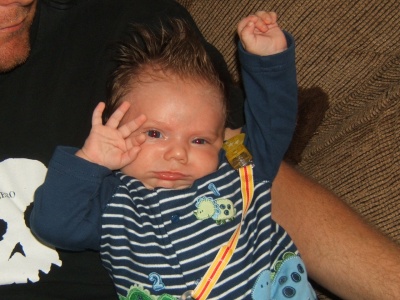 Over the course of this month, our little baby has grown so much, it is hard to believe he was born just 2 months ago. Click HERE for pics and HERE for added videos to his video archive. But he still is my little baby and we share little moments that I will treasure the rest of my life. My favorite moment I share with him everyday is when I burp him after he nurses. I hold him up on my shoulder and he either rests his sweet head there and sighs with a satisfied contentment while I rub my cheek on the back of his head and smell and feel his soft hair as it brushes my skin. Or he is very alert and so excited to see the world that he tries to climb up higher on my shoulder and he looks out behind me with big eyes, flared nostrils, and pursed lips. I feel his cute little feet push against my lap or my stomach as he tries to get a better look at the pictures behind me on the wall. And I can hear his breathing pattern change to a rapid, excited one.

I also love how sometimes when he nurses, he reaches up with his free arm and tries to touch my face or my necklace or my collar bone as he stares into my eyes and sighs. I realize that I am his first love and I am honored to be that special person and cherish my role greatly as I know there will be a time when he no longer loves me in that same way and yearns to leave my arms and see the world without me.

We also share a special time when he gets his diaper changed. We hang out at the diaper changing table for a good 5 minutes because he enjoys it so much. In the morning, I will change his diaper, dress him in his day clothes, wipe his face and neck, and brush his hair. He cooes and squeels and smiles through out the process and I kiss him and tickle him and sing to him. Mike began hearing all of this activity a couple of weeks ago and now likes to volunteer to give a diaper change because Kanan will interact with him in the same way and I think he gets a great satisfaction from those moments. Mike noticied that when he gets fussy in the late afternoon, he will take off all of Kanan’s clothes and let him hang out naked on the changing table. The crying stops for a little while and Kanan gets a good fresh feeling downstairs. We have to watch out for a fountain spray though.

Time has been flying by and Kanan amazes us everyday with new milestones that he has reached. Here are a list of his great achievements and a few of his challenges.